I’m reading many Afro-centric postings that the original US Statue of Liberty was an Afro-American woman. And some are even suggesting the beautiful iconic “Lady Liberty” of St. Maarten (of which I visited this fall) was the rejected monument.

I position this posting in my Kemetic Studies blog not for an “Afro-American History” lesson; but rather another instance how studying Kemetic Truths encourages thinking using ancient inter-standings.  In other words… the truth Cannot be hidden or destroyed for those seeking 🙂

So I’d like to kindly offer my analysis on the question …was the original Statue of Liberty an Afro-American woman? Please let me begin by saying…Yes! and here is how and why:

Analysis 1: Why the statue?

What is not widely taught is that the Statue of Liberty presently in the New York harbor was not originally meant for welcoming immigrants to the shores of the United States. Rather, the monument was originally the conceptual idea of the French anti-slavery activist Edouard Laboulaye to celebrate the emancipation proclamation of all Americans after the civil war of the union versus the confederates.  Not sure why this story is not widely taught in history or during touring activities???

Analysis 2: She is a Freed Slave

The original Laboulaye concept for Lady Liberty was a woman with broken shackles and chains in her left hand. From this original concept I make the very good assumption the original woman was to be of a recently freed Afro-American. US leadership responded to the original lady as being insensitive to some (including former slave owners) and suggested the more Euro-Asian woman the US has today… keeping a torch in the right hand but rather a book in the left hand. 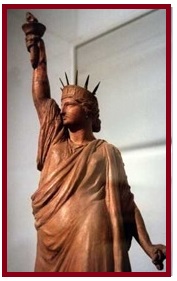 Analysis 3: Chains at Her Feet Today

But even as the builders of the statue conceded to replacing the features of the woman and the chains in her left hand…to this day, there exist chains laying at the feet of Lady Liberty although most of it is hidden beneath her draped robes.  Again, this fact is not widely taught and impossible to see from below the platform. 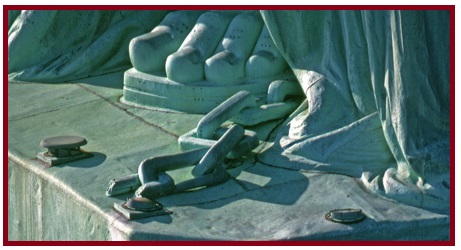 Another bit of understanding about the statute that intrigues me is that the statue was delivered in copper as I suppose was the original intent being there is documentation that when the colonist first arrived in North America they found “copper colored people.” These copper colored people were enslaved along with the colonization of the lands. Also interesting is how copper can turn black as illustrated by parts of the mostly green stature today.

So from my above analysis, I feel very confident in assuming YES, the original US Statue of Liberty was indeed to be an Afro-American woman. And now I fully understand why many are making this original concept a comparison to the beautiful statue on the Caribbean island. Lady Liberty of St. Maarten depicts a tall and strong Afro-Caribbean woman with a guiding light (torch) in one hand and broken shackles with chains of slavery in the other.

Even though I’m told the St. Maarten statue was built in 2007, I can’t help but wonder if her concept mirrors that of the “original” US lady of liberty???

Being both monuments were conceptualized to salute “enlightenment” to the world on ending oppression; again, I understand why so many are making assumptions the Afro-Caribbean monument is indeed the “Original Statue of Liberty.”