Some thousands of years ago, it is believed The African (AFRKN) culture to be the oldest group of hue-mans on earth. I believe this too. These hue-mans came from the central parts of the AFRKN continent; and it is believed the hue of their skin to have dark color. I believe this also. Because the color is described as “black”, some of the people have been labeled Kemites for the word kem (or Greek for black). I’m adopting the classification Kemites (KMTs) as some of the earliest hue-mans to live in central AFRK and to be MY original ancestors. 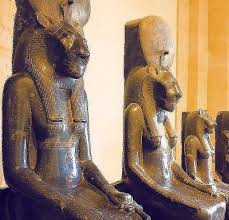 So, where did my KMT heritage go…or where is it now?

Here is my most recent theory on the Evolution of my KMT ancestry:

The KMTs were highly intelligent explorers. Their alchemist ways of incorporating science with philosophy encouraged them to discovering new places and finding ways of adapting to new environments and experiences. What made the KMTs truly hue-man were their traditions centered around the principles of MA’AT (M’T) that provided Balance, Truth, Harmony and Peace. Because of M’T, KMTs didn’t explore for the purpose of war expansion, wealth accumulation or power.

The KMTs traveled in every direction from the center of AFRK where a certain group traveled western-ward to what is called the Atlantic ocean. Here, great kingdoms of west-AFRK culture were developed. But over time the west-AFRKs began loosing their practice of M’T over generations. Interacting with other cultures, some west-AFRKs incorporated less than hue-man practices of war, deception, jealousy and greed into their lifestyles. While moving away from M’T, some west-AFRNs were encouraged to sale other AFRN slaves to Europeans for gain.

Many of the AFRN slaves were delivered to what is now called the Caribbean (CRBBN) where European slavers had already killed-to-extinction the indigenous peoples of the islands. Many years passed before the AFRN was free to live outside European slavery; and because the CRBBN islands were developed and built by slaves without pay…rightfully so the islands became their new Pharaohs (or kingdoms). The generations of former slaves in the CRBBN islands are technically no longer AFRN by culture or nationality today. The generations of neo-KMTs reside in their present day nations on paradise-like CRBBN islands.

Other AFRN slaves were shipped from the CRBBN islands or directly to what is now considered the mainlands of the USA. Once the generations of these former slaves were free of what was originally European slavery, they could not claim the mainlands of the USA as their home-of-nationality because this land is still inhabited by its indigenous people called Native-Americans (N-A). Unfortunately, the N-A people have limited control and power of the continent in what is called today westernized North America. The western-culture of the USA, set-forth by European immigrants, is Not compatible with the hue-man sensibilities of those from AFRKN genealogy and this causes confusion, disenfranchisement and dis-functionalism. Millions of people labeled as African-Americans (A-A) are living outside their nationality, and not practicing the culture that fits their hue-man sensibilities.

I have identified myself as KMT because my personal attributes line up with all I described about the KMT culture in the beginning of this blog. But I do not believe all A-A to be KMT. At the time of this writing, although I physically reside on land rightfully belonging to the indigenous Native Americans; spiritually I’m with the Pharaohs of ancient KMT 🙂

Realizing I can never be anything but what I am. It is great to understand who and what I am…embrace it…find balance, harmony and peace again.